With the cold weather upon us, there are few things more appealing than curling up with a warm beverage and an engaging book. I find the winter is a time to settle in and turn inward. It’s a season of consideration of how to better ourselves both personally and professionally.

This is why this month I’m adding Holding the Gavel: What Nonprofit Leaders Need to Know by Nanette Fridman to the Gordon Fischer Book Club shelf. For anyone who currently or is thinking about serving on a nonprofit board, this book is like a guidebook on what to expect and how to be a successful, contributive member of the board. The book contains insider stories from people who have experience leading boards and valuable information on what good governance looks like. 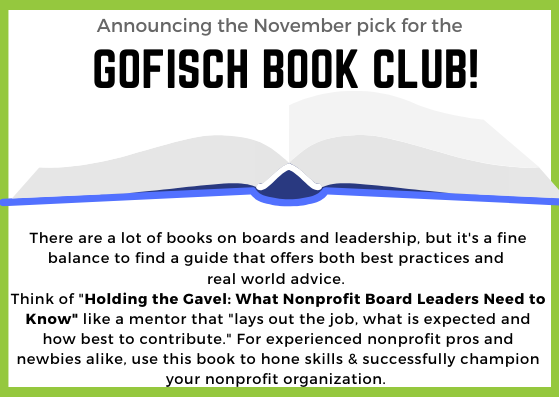 Some of these sorts of books can get dreadfully boring or are too general to be applicable, but this book is both helpful and specific on topics ranging from how best to conduct due diligence to managing difficult board members.

When it comes to passing on and developing a board (and the organization it serves) and leaving it better than you found it, this roadmap of a nonfiction book is worth your time.

With its feast of turkey, stuffing, and mashed potatoes, Thanksgiving is the obvious holiday to look forward to in November. But the overall focus of Thanksgiving—the concepts of giving, sharing, practicing gratitude—is something you can cultivate for the entire month of November, especially on the lesser-known “holidays” of National Philanthropy Day and Giving Tuesday(technically in December this year).

On November 15 plan to celebrate National Philanthropy Day (NPD) with a donation of time or funding to a cause that’s near and dear to your heart. No matter how much you’re able to give, the point of this day to recognize that charitable donors and volunteers make a significant difference and impact. As the Association of Fundraising Professionals puts it:

“NPD is a celebration of philanthropy—giving, volunteering and charitable engagement—that highlights the accomplishments, large and small, that philanthropy—and all those involved in the philanthropic process—makes to our society and our world.”

A man by the name of Douglas Freeman conceptualized and organized the initial (unofficial) National Philanthropy Day in the early 1980s. Then in 1986, President Ronald Reagan designated NPD as an official day. NPD is also a key event a part of a grassroots movement that intends to raise awareness and interest for the importance of effective philanthropy.

Popular on and spurred forward through social media, Giving Tuesday is often found with an accompanying hashtag (#GivingTuesday). Billed as a “global giving movement” Giving Tuesday is the Tuesday after Thanksgiving and after the shopping sprees of Black Friday and Cyber Monday. Held on December 3 this year, it’s seen as the sort of kickoff to end-of-year giving and it’s encouraged you donate your time, monetary donation, or even just your voice and ideas to a charity/cause that you care for.

With giving top of mind in November, maybe you have an idea for how you would like to support the important charities you care about but are unsure of how to go about making certain donations. For instance, did you know you can give to charity through your estate plan? How about the immense benefits of the retained life estate? How does giving fit in with your retirement benefit plan? I’m happy to help. Email me at gordon@gordonfischerlawfirm.com or drop me a line at 515-371-6077.

The November edition of GoFisch is live! This month’s edition features:

Like what you read? You could think of it as a free holiday gift to yourself to subscribe! Here at GFLF we like to think of it as the least boring law firm newsletter you could hope to read.

Halloween and Thanksgiving aren’t the only things you should be looking forward to in October and November! I like to help spread the word about all the awesome events, awards, and grants available in Iowa. There are so many great opportunities for nonprofit pros, board members, volunteers, and donors, that range from webinars to workshops. But, life is busy, and it can be hard to keep track of what you should register for or put on your calendar. That’s why I compiled a list for your convenience!

There are so many great events and opportunities for nonprofits and the people that advance them that there is no doubt I missed some in the list above. Please feel free to add applicable events for October and November in the comments below! If you would like to notify GFLF of any upcoming nonprofit-focused events and opportunities in the coming months, don’t hesitate to email GFLF’s Chief Content Officer at mackensie@gordonfischerlawfirm.com.